Dan sent two photos of bowl #49 along with this story about the bowl's new owner.  Thanks, Dan.  Looks like bowl #49 is in good hands. 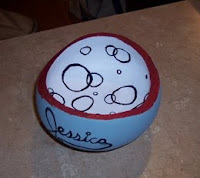 Nancy,  I’ve sent you two pictures of bowl #49.  I got the bowl home and put a number of coats of poly on it but the pine wood was very porous and just sucked up everything I put on it.  I also wasn’t totally thrilled with the basic shape of the bowl and was considering tossing it.  However, it just so happened that one of my granddaughters just returned from two years out of the country with her parents and had just painted her room (purple—she is 13) and she wanted a bowl to put some of her things in. So, I offered her the bowl and allowed her to paint it however she wanted.  The result is the painted bowl you see in the picture. So, we are now both happy.  Warmest regards, Dan
Posted by Nancy Supik at 11:40 AM